Wow, I found this old wicker rocker last week.  It just has such an interesting shape um..but someone had cut the seat out of it.  I was going to sell it but I had some flowers here that I had rescued from the used flower store..LOL..not really..but they were mistreated and sickly so I saved them.  I guess the point here is that they are not as bright as I would bring home if I had my choice but they are all I had.  So after giving them a seat in the chair, I decided the chair has a home too.

Maybe next year some paint, I'll keep you informed! 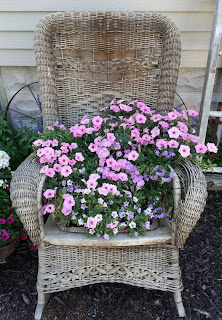